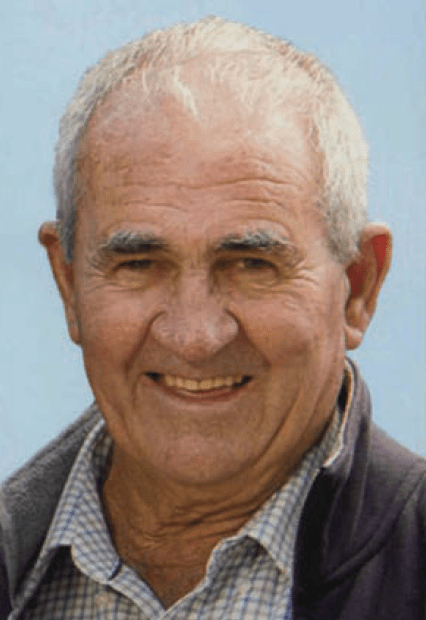 Paul Christopher Redden, the second son of Matt and Pat was born in Terowie, on 9th August 1945 which was also his Grandma Catherine Redden’s birthday. Paul had a happy childhood, growing up at Pinevale with his 4 brothers, Robert, Tony, Phil and Mark and his sister Louise.

Even at a young age, Paul was an entertainer. He was known for his ability to milk the cows for city visitors who were fascinated when Dad gave them chocolate or strawberry milkshakes straight from the cow, depending on which way he pulled the tail. Little did these city kids know that he had spiked the buckets with strawberry and chocolate topping.

Paul’s primary schooling was at St Joseph’s School in Terowie. His early secondary schooling was at the Marist College in Mount Gambier, learning to grow potatoes and onions and how to milk cows. He then spent one year at Sacred Heart College before coming home to help on the farm. It was during this time that Paul partnered Anne at the debutante ball in Jamestown. This was the beginning of 57 years of love and friendship.

At age 18, Paul served two years of National Service in the Army, enjoying comradery with a new group of friends. During this time away Paul wrote to Anne every week and never missed Mass on Sundays.

On his return to Pinevale, Paul tried his hand at farming. It did not take long for him to decide that it was easier to be a shearer and thus began a new career. This saw him travelling throughout the Mid North, forming lifelong friendships with the families he shore for.

It was after this time that Lizzy officially became Paul’s right hand man, spending hours on end with him on the tractor, along with the puppy, the kitten and nursery rhyme tapes. Many hours of entertainment followed. One of Stephen’s first memories of Paul was helping him to feed out hay and collecting train loads of hay from WA during the drought of 1982. It was soon after this that Paul embarked on a hay exporting business, shipping hay to Japan. Shearing was always held in the September holidays so the family could help. As children we all learnt to rouseabout and how to shed sheep.

In later years Paul developed a successful business carting local farmers’ wool to Adelaide and backloading steel for Redden Brothers. His grand children loved accompanying Papa Paul on these trips, enjoying the special breakfast stop at Roseworthy and meeting friends along the way.

Paul had a deep sense of faith, never missing Sunday Mass even when he had skylarked the night before. The sun will come up tomorrow was one of Dad’s favourite sayings, especially when we rang him with our worries. He was always positive and looked forward to his next adventure with great excitement. Dad will be fondly remembered for his love of life, his jovial yet positive and supportive character.

Charity or Paul’s generosity was one of his gifts. He was always the first person to make sure that everyone had a drink and enough to eat. He thought nothing of supplying food for everyone at working bees. He was a dedicated volunteer for many local organisations, including the Terowie Football Club, Rural Youth, Jamestown Show Society, Jamestown Kindy, St James Parents and Friends, Apex, Lions, Jamestown Bowling Club, Belalie Arts Society, Liberal Party, Jamestown Development Association and St James Parish Council.

Paul was a very proud father and Papa Paul of his children and grandchildren. He loved attending our sporting events where he was an enthusiastic spectator, despite not always understanding all the rules. He also enjoyed goal umpiring and scoring at netball.

In 2014 Paul and Anne retired to Arran Street Jamestown, creating a beautiful home, garden and of course a shed to house his art collection which became Art on Arran. One of his favourite activities in recent years was assisting with the Rural Women’s Gathering mosaic project.

When it was completed and moved to Ayr Street he thought his ute was missing- it was in the shed at last.

Paul always enjoyed finding out about people and their interests. He has left many special memories. He taught his family to look at each sunrise and to remember that each day is a gift and that it is up to us to make the most of it.

Our Condolences to the Family and Friends of Paul. Paul will always be remembered fondly in our hearts and minds.