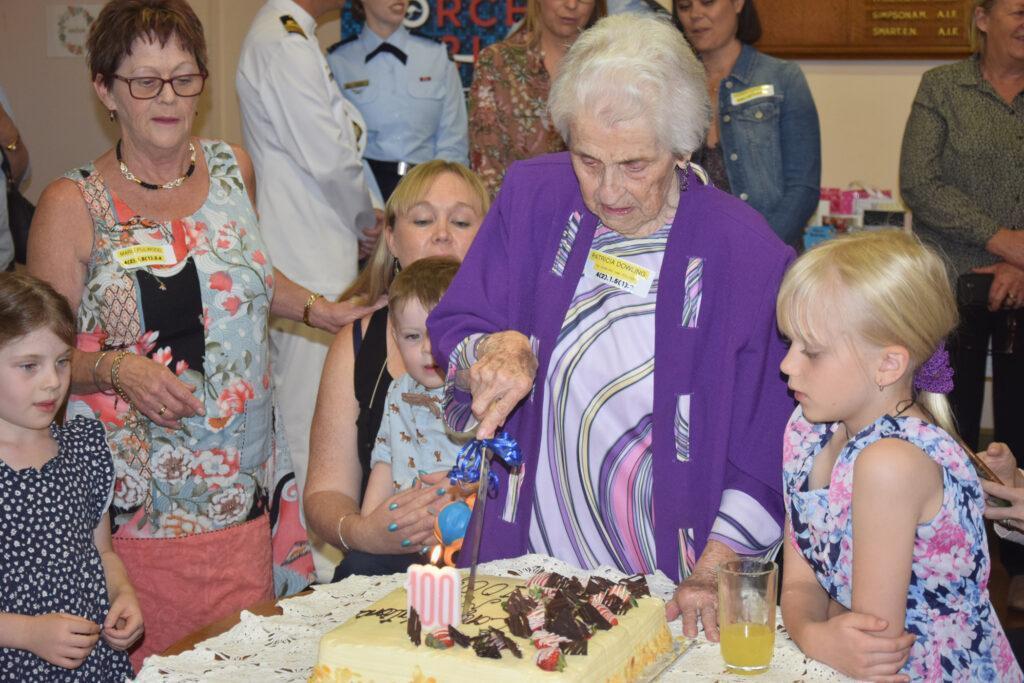 There were 100 reasons to celebrate Pat Dowling’s birthday at Jamestown recently.

As family and friends gathered and a big cake cut, the centenarian said she was overwhelmed by her 100th birthday celebration.

With her four children – Kevin, Don, Neville and Marie – all there for the party, the grandmother of eight and great-grandmother of 12 was given some very special surprises to mark the special occasion.

“It was a very big celebration, much bigger than I ever expected,” Pat said.

“I said to my daughter, Marie, I hope I get a bunch of flowers. Well, I got about 20 bunches of flowers, along with a letter from the Queen, the Governor General of Australia, the Prime Minister, federal leader of the opposition, Governor of South Australia, the Premier, the state opposition leader and Federal Member Rowan Ramsey, and a personalised video message from Daryl Somers filmed with the Hey, Hey, It’s Saturday set in the background.

“I also got a blessing and congratulations scroll from the Pope. I have been receiving communion at home but had asked to go to church as I wanted to say thank you and I wanted my family to come along, and that’s where I was given that special message.”

To top it all off, Pat was presented an award of recognition from the RAAF at her birthday party on Sunday.

To her complete surprise, RAAF Edinburgh base liaison officer group captain Greg Weller, and RAAF cyber security flying officer Theresa Sobb were at the celebrations to present the award to Pat, now a centenarian veteran.

Pat (nee Collins) joined the air force in 1942 – she says to the displeasure of her family – and became a radio telegraphist, taking messages in morse code from around the world.

“I joined in November 1942 and I started my training at Ascot Vale in Melbourne,” she said.

“My family was not pleased about it at all, but I was 21 and old enough to please myself and have never regretted it, it was a good experience.

“In April, 1943, I enlisted and that meant they could have sent me overseas anywhere, which fortunately did not happen.

“I was sent back to Adelaide, attended radio school in Kermode Street, North Adelaide, and from there was sent to the secret, underground station near Gawler where we worked in three different shifts, taking messages from the RAAF stations all around the islands, it would then be decoded and sent of to the teleprinter in Melbourne.”

Recently, Pat has had the opportunity to reignite her skills, with the Gawler National Trust loaning her a morse code machine to practice on.

“Once you know it, it does come back to you,” she said.

“I haven’t got much sight left, but a friend brought the code to me in large letters and I was able to see it– I could still send S.O.S and ‘hello’ – but I haven’t had much time to practice.”

On moving to Whyalla from Laura to work at the new Eudunda Farmer’s store, she saw the first ship ever launched from there.

She and her late husband Terry were also the first to have an afternoon/evening wedding at the church in Hindmarsh when they were married on January 24, 1948.

The couple met after her early discharge from the RAAF, with Pat leaving the service to look after her parents.

“I would go to dances and because I was ex-service I was allowed to have cigarettes then,” Pat said.

“A friend and I went to a dance and at half time we went to have a smoke and there were a group of friends there. I say that smoking isn’t all bad because I met my husband Terry there when he asked me if he could borrow a cigarette.

“I don’t know how he ever thought he could repay the cigarette, but we developed a friendship and we married in 1948.”

Pat said being active was secret to a long life.

Over the years she has played golf, tennis, basketball/netball, bowls and her favourite sport, croquet.

She plays the pianola to keep her “legs active” and has a short walk twice each day at her own home where she still lives independently.

And to keep her mind active, Pat enjoys a punt on the races every day.

“I don’t bet a lot of money, but I do enjoy a dabble on the horses,” she said.

“Last week the family had a race named after me at Naracoorte and I did back the winner of that race.”