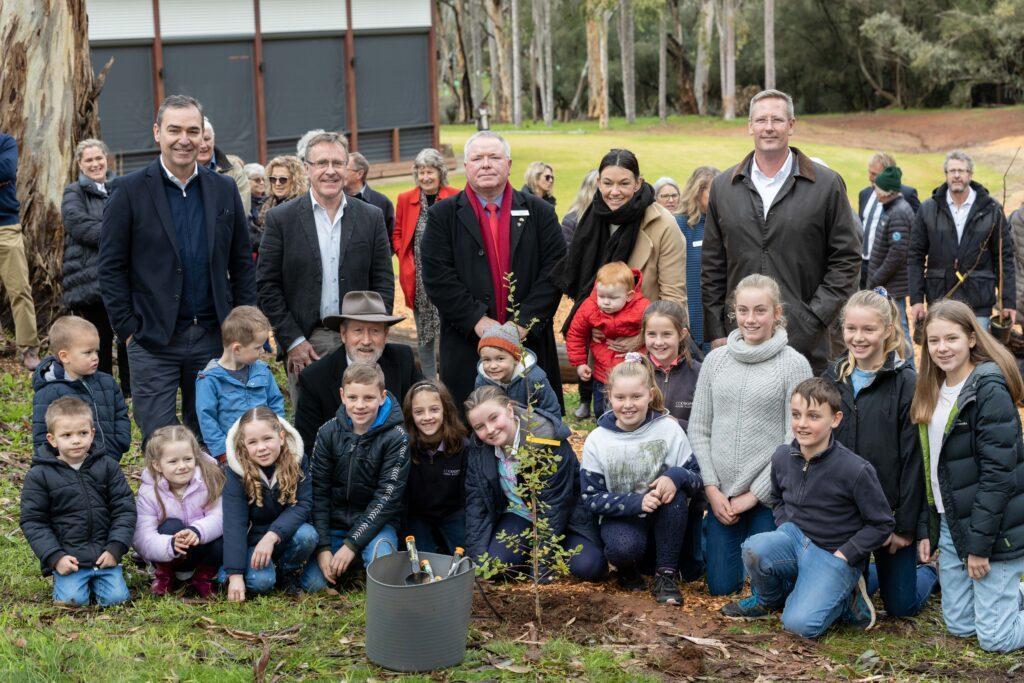 Premier Marshall congratulated the Bundaleer and Jamestown community for their work in developing Maple & Pine, funded by $660,000 in government grants and more than $500,000 of local community contribution.

“This is a very special project,” Premier Marshall said.

“There have been contributions from State tax-payers, Federal tax-payers and Northern Areas Council but the vast bulk of the work has been a contribution of the people of Jamestown, Bundaleer and surrounding areas who have put their heart and soul into this fantastic facility.

“I want to congratulate this community for their great work in creating this facility that will enhance the whole region and provide a great opportunity to share the story of Bundaleer being the place where plantation forestry began in Australia.”

“Support from all levels of government and extreme generosity from our community has enabled us to produce a world class venue at Bundaleer that our local community and the entire region can be very proud of,” Mr Boston said.

A heartfelt moment was the Welcome to Country & Acknowledgement of Country for the shared traditional owners of Bundaleer, Ngadjuri and Nukunu Nations.

Parry Agius, great-grandson of Barney Warria, the last of the Ngadjuri Law-Men, said the Welcome back to Country marked the beginning of a journey of reconnecting and sharing space for the survival and identity of future generations.

“Ngadjuri have been absent from our ancestral lands for more than 200 years, but today we today start a new journey of reconnecting with our land,” he said

“This acknowledgement is the beginning of a new connected future and space of healing between those who reside and travel across the land and the Ngadjuri and Nukunu families.

“We would like to invite the local community to connect with us, to develop a positive, frank and open relationship with us as the traditional owners, and to have an enquiring mind.

“We would like to support each other to grow together in a community of inclusiveness so we never become separate again like we have been.”

Mr Agius acknowledged the story written by his daughter Mel as being the Welcome to Country to be used for Bundaleer and region. Mel’s story and artwork will feature on signage at Bundaleer Forest Reserve.

Maple & Pine is the cornerstone of Bundaleer community’s strategy to keep the picnic ground and walking trails of Bundaleer Forest Reserve freely open to the public in perpetuity.

“Following the 2013 Bundaleer bushfire, in addition to the risk of losing commercial forestry in the Mid North, we recognised the threat of losing this precious recreational space and forestry heritage enjoyed by this community and countless other visitors for 140 years,” Mr Boston said.

“November 2014 was the commencement of community action to preserve these public areas and retain and respect a small but significant part of forestry history in Australia.”

“In early 2018 came a major turning point when the State Government announced the 22-hectares would remain Crown Land, and the network of recreational trails throughout Bundaleer would be preserved in perpetuity for public use.

“In the months that followed, ForestrySA appointed BFCAA as funded caretakers, responsible for tasks including amenity cleaning, fire track clearing, trail maintenance, and arboreal care, and we continue those responsibilities today.”

Since taking on the management of the site, BFCAA has transformed Bundaleer Forest Reserve, constructing a nature playground (again achieved with significant community support), along with two major creek rehabilitation projects.

However, it is Maple & Pine that has the most important responsibility, setting out to generate profits to fund on-going community development of the picnic ground and walking trails.

Two key initiatives to support the economic sustainability of Bundaleer have also been launched.

The first is a campaign to attract 1000 Friends of Bundaleer Forest Reserve, with each ‘MyBundaleer’ member contributing $20 per year. Anyone who wishes to support Bundaleer as an annual My Bundaleer subscriber will know they are contributing to the community-driven effort to ensure an exciting future for Bundaleer.

The second initiative is a Commemorative Plaque, where individuals and families can share their individual or family connections. The plaques will also raise funds to purchase an electric barbecue for Bundaleer Forest Reserve.

PrevPreviousPre-Order your J150 Book Now!
NextDr Stephan Langford RetiresNext
www.visitjamestown.com.au
Plan ahead for your next visit to our beautiful Jamestown
LEARN MORE ABOUT JAMESTOWN